315 Lives: A visual story about Ellen Estill and the cats of Kitty Lodge 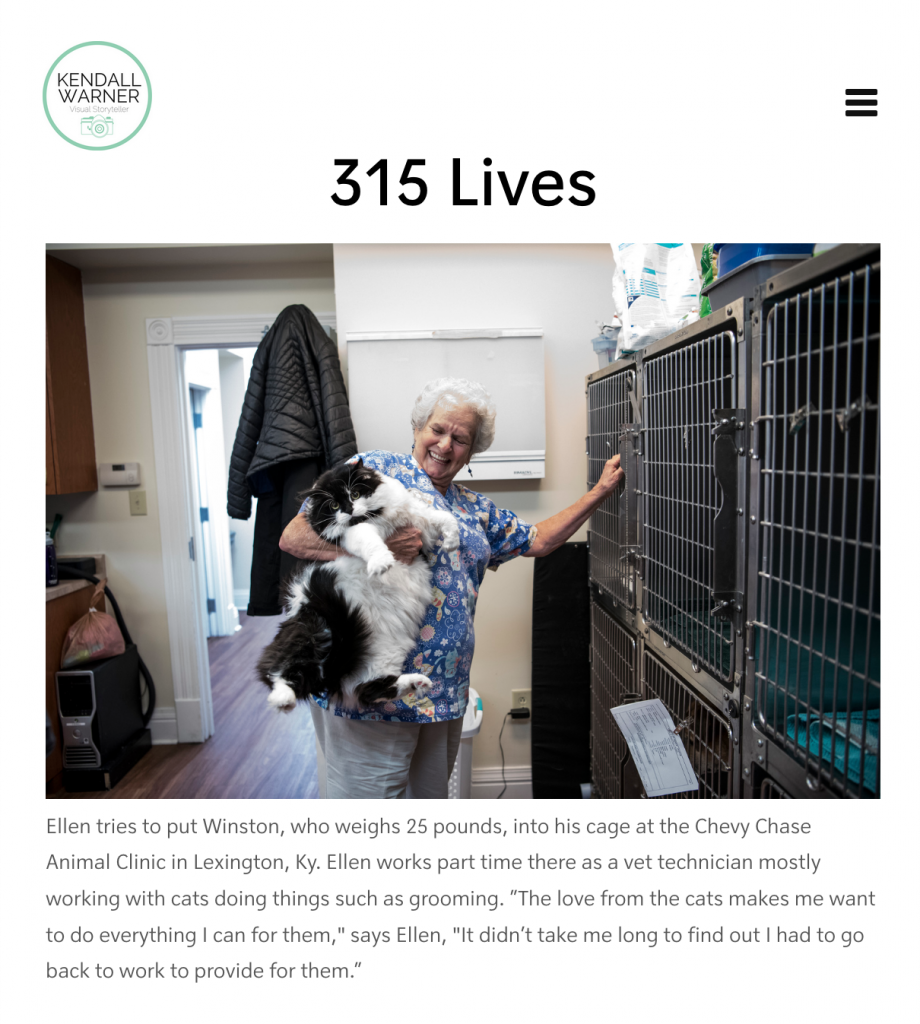 Kendall Warner, a photojournalism student at Western Kentucky University, composed this story about Ellen and the cats of Kitty Lodge as part of a national project to tell the stories of people in small town America. Participants in the project include college and university students from across the United States and nationally recognized professional photojournalist mentors. This year’s project featured residents of Mount Sterling, Kentucky and Ellen was chosen as a noteworthy resident. She was randomly paired with Kendall to tell her story. Kendall spent several days following in Ellen’s footsteps at work and at home. Lucky for all of us, Kendall is a cat lover herself and fit right into the routines of Kitty Lodge. Please click on the link below to enjoy her visual story.

Uncommonwealth: Mount Sterling woman’s home is a sanctuary for cats 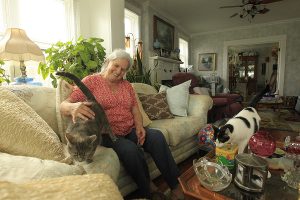 Ellen Estill sat with Sage, left and Mitt-Tons at her home in Mt. Sterling. The Kitty Lodge is a non-profit home for older cats whose owners can no longer care for them.
Photo by Pablo Alcala
Lexington Herald-Leader

And then there are 32 cats — most of them from people who died, got sick or had to go into nursing homes and could find no one willing to take on the rigors of pet ownership. Estill points out a cat whose owner has stage four cancer. Only two of the cats belong to Estill.

Cats who were left in the lurch when the person who cared for them lost the ability to do so had no refuge. So Estill made one — a cattery for animals, once petted and indulged, who were left confused and alone to live out their last years. She calls it “a retirement home for older cats.”

Here they get premium products: Science Diet food and Fresh Step premium cat litter. Estill even lines a couple of the litter boxes with paper for the cats who prefer that toilet arrangement: “You know how they are, they’ve got a mind a of their own.”

She has eight litter boxes, including several that are jumbo-sized.

She even went to the local planning and zoning committee to get a permit for her endeavor, which has been operating as a non-profit since 2009.

The cats’ names include Stewie and Miss Kitty, Rebel and Little Britches, Smokey and Sage. Each cat gets a name, and its personality quirks are noted. The basement of Estill’s home is theirs to roam, lined with furniture to lounge on. Outside there is a yard with a high fence and a sandbox in the corner.

Not all the cats came from people who were sick or incapacitated. Bob-tailed Stewie was a feral cat who came across the roof of the house, arrived in the backyard and decided to stay.

Mitt-Tons got a special highfalutin name, Estill said, because “She’s French, exciting and exotic.” Smokey is diabetic. Sage tried to immerse himself in a bowl of catnip.

Estill, 65, works part-time for a Meals on Wheels program. The rest of her day she devotes to her cats. Between feeding and cleaning the litter boxes, it’s a full-time job.

“A lot of people think that cats, if you throw them outside, they’ll do OK,” Estill said.

That’s not true, she said. Cats that have lived indoors are bewildered by being outside.

And cats might seem unsociable to strangers, but they become used to routines and to human contact.

Jim and Pat Lawrence of Lexington needed to place a cat named Ruka, a regal feline that had come to live with Jim’s sister, Nancy Stong, after being brought from Hawaii by a niece.

When Stong died in January, 2012, the couple didn’t know what to do with Ruka. Pat Lawrence was allergic to cats. Eventually the couple found the Kitty Lodge, where Ruka now lives.

Occasionally, Jim Lawrence said, Estill will update him by cellphone on Ruka’s progress. In turn, he sends occasional donations.

“We wanted to make sure she got a good home,” said Jim Lawrence. “We weren’t ready to turn her over to just anybody.”

Dr. Eric Headley, a veterinarian at Lexington’s Chevy Chase Animal Clinic, said that Estill is “100 percent committed to these cats, no matter what. Whatever the temperament of the cat, she always gives them a second chance, a third chance, a fourth chance. ... It’s amazing what she can do with them.”

The cat home got off to a swift start. Soon after Estill moved in during 2009 with an eye toward starting the Kitty Lodge, three female cats were dropped off: “If I hadn’t had them neutered, I’d have nine million cats by now,” she said.

Once cats establish social relationships with each other, they’re home, she said.

“Once they make friends, they’ve got it made,” Estill said.